Hi all, it has been so long since last post and mainly because lot has happened to me :D Nothing bad, I promise. I finally graduated on June after hectic months with my thesis at spring. Also got permanent job on June, started week before graduating! And we moved on August, DD started her pre-school, DH started his school at University of Helsinki and so on :D Belive or not, I have been also stitching and finally finished my Crazy January Challenge piece, Tinkerbell. Will ask girls what they want this to be tomorrow, let's see about that later. Kind of have small problems now as after moving I have lost my WIP crazy bag...after 3 dayd I will be at home for a week, so hoping best then... Otherwise, I don't even want to think! So see ya again, hopefully little bit earlier next time! 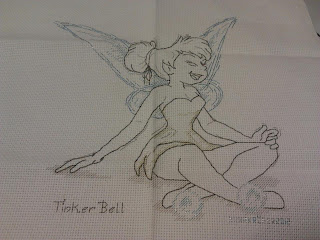 Congrats on your finish!

Tinkerbell is gorgeous... I love the shine it has :D and I'm happy that life is being good to you and you have finished your course and got a job :D

Congratulations on your finish , she is beautiful. Hope you find your other crazies

Tinkerbell is wonderful. Great news on your job.